Description
Most have seen the iconic photo of the raising of the flag at Iwo Jima. Not many know how it came to be so well known. This Uncommon Valor rear window decal is patriotic and thought provoking. It perfectly depicts a moment of chaos frozen in time. The statue stands out against a blue sky and is artfully framed between two trees on display in Washington D.C.

Although it was politically used to show heroism and dedication it was actually a photo captured by a photographer not during the battle. The soldiers in the photo were simply swapping the flag that was raised during the battle so that the original flag could be given as a keepsake. Not many people were aware of this because the government used the image of the soldiers in it to raise money and support the war. The photo became famous… with a history like this, of a war so unsupported by Americans, this decal is sure to be a thought-provoking image of the rear window of your truck.

WINDOW CANVAS WARRANTY
All Window Canvas rear window decals are warranted against defects in manufacturing for the lifetime of the product. Window Canvas warranties against fading for 3 years. Warranties are for product only and limited to the value of the replacement product. Neither seller nor manufacturer shall be liable for any damage, expense, or consequential damage arising out of use or the inability to use the product.

retired and bought a new truck added the eagle on rear window very proud of graphic . little hiccup with delivery when it got in the right hands was taken care of would recommend you guys in a heart beat hope to use again thanks again

Received the decal and install no problem. Looks great on my 2021 chevy 1500.
Thanks

Looks great, everyone loves it!

My husband absolutely loves it

I can see why! It looks amazing! 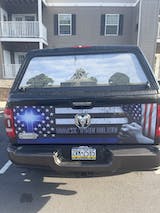 All Gave Some Truck Window Decal

$87.00
The All Gave Some truck window decal is a sure way of expressing American pride with the added visual of the proud and fearsome American eagle. The rear window decal... $87.00
This USA Flag Wave truck window decal is a stunning representation of the flag of the United States of America. The waves in the flag truly bring this graphic to... $87.00
Show your patriotic side with this USA flag truck window decal. It features a billowing American flag in all its splendor, shown as if it were blowing furiously in the... $87.00
Custom Vinyl Graphics is proud to offer our own line of exclusive, amazing rear window graphics! You won't find them sold anywhere else. We use the highest quality perforated vinyl... $87.00
One of our most popular decals is now available in a truck window decal. Show your patriotism on the rear window of your car or truck.HELPFUL LINKS: How to apply... $87.00
Show your patriotic side with this Vintage flag truck window decal. If you love the USA, you will want this graphic on your vehicle. It is very simple but states... $99.00
The Eagle in Flight Flag rear window decal is a more classic and subdued style which emphasizes the purity of America with the bald eagle soaring proudly across the American... $87.00
This Don’t Tread On Me truck window decal makes just as bold of a statement today as it did back when America was struggling for its freedom from Britain. This...
BACK TO TOP