Star Wars fans - Turn your car into the Millennium Falcon!

by Leanne Arnold on June 08, 2013  in Category_Custom Rear Window Graphics

Star Wars is one of the biggest film franchises out there today. Since the first movie’s release in the 1970’s, Star Wars has captured the hearts of millions of people out there today. The characters and the actors who portrayed them have become pop culture icons, appearing on every piece of merchandise imaginable from lunchboxes, shirts, backpacks, posters, book covers, action figures, and much, much more.

The movies have grossed millions worldwide and have been acclaimed by critics. New Stars Wars fans are still being made all the time which started when the movie came out over 40 years ago. To many, Stars Wars was a special part of their childhood. Today, the franchise has spawned books, spinoffs, cartoon series, comic books series, and a variety of other types of media. Added to the vast catalog of merchandise is a custom Star Wars rear window graphic!

This graphic is perfect for diehard fans as well as casual fans of the series. When applied to the rear window of a car, it gives the illusion that Hans Solo and Chewbacca are riding in the Millennium Falcon contained in the car. When you look at the graphic from the outside, it appears as if Hans Solo and Chewbacca are within in the car and that the span of outer space is before them. It seems as if the car window itself is looking out towards outer space, one of the many window graphics dedicated to Star Wars. Hans Solo is on the left with Chewy on the right. It is really an amazing example of a rear window car graphic.

Star Wars fans will definitely appreciate this, especially since it features one of the iconic scenes from the movie. It will give fans the feeling that they are riding in the Millennium Falcon as well. Star Wars fans really like to live the fantasy of being in the Star Wars universe. The world of Star Wars was created in such a way that fans could imagine themselves as one of the heroes of the movies themselves.

Fans of the franchise are so dedicated that they go as far as to dress up like characters from the movies. This rear view window graphic would mean a lot to a fan who has imagined themselves riding in the Millennium Falcon at some point. The realism of this graphic is what makes it stand out the most. The way the image pops out on the window would make anyone do a double take. It can definitely rank among the most unique examples of Star Wars merchandise out there.

I ordered the wrong color and I contacted them immediately and they changed my order with no issues. Great customer service 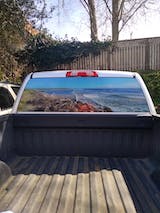 Received decal within a few days. Image is crisp and clear.

It looks great but more importantly it really helps keep the sun out.

Unfortunately I didn't use the Graphic as it ended up being too small for the truck cap I intended to use it on.